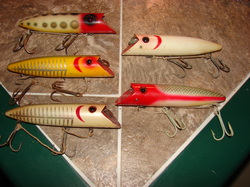 Heddon King Bassers Models 8560,8550 and 8540
Heddon King Bassers were produced mainly for saltwater use and were heavily marketed in the pacific northwest for use as salmon baits. While the standard basser was in production since the early 1920's, the King Bassers were first offered in 1938. By the late 1940s. the model 8540 and 8560 were discontinued with the 8550 being offered until approximately 1952. Three models with differing lengths were produced, the 8540 (4.5"), 8550 (5") and the 8560 at 6". All were made with glass eyes with the earlier models having smaller glass eyes and the later having the large "Teddy Bear" glass eyes. The model 8550 which were produced until approximately 1952 were made with painted eyes in its later years of production (late 1940s to 1952). Cataloged colors were : White/Red Head (02), White/red gill (2M), Perch Scale (9L), Shiner Scale (9P), Pearl X-ray Shore (9PLXR), Allen Stripey (9PAS), Blue Herring (9PBH), Yellow Scale (9YS), Yellow Spotted (9SPRH), Yellow X-Ray shore (9XRY) and Pearl Blue Shore (9PLXB). As with other baits, other colors are found. All of these models came with a "break away" string hook rigging with the concept being a large fish was not able to use the lure body as leverage to throw the hook during a fight.  Like the King Zig Wags, the King Bassers came with a "skirt" attachment on the belly which is basically a thumb tack in which to attach a vinyl skirt. King Bassers typically come with a metal plate on the lip but have been found without, especially on the 8540 models. Most are marked on the belly or chin with a simple stencil marked "HEDDON KING BASSER" or just "KING BASSER" or in some cases "HEDDON". 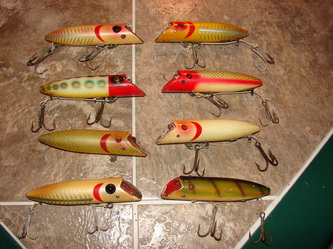 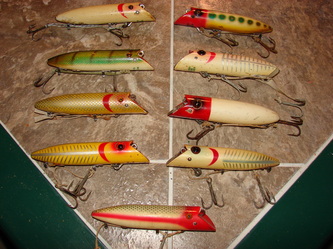 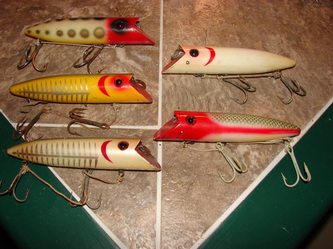 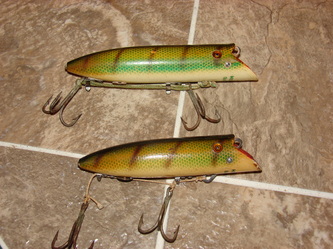 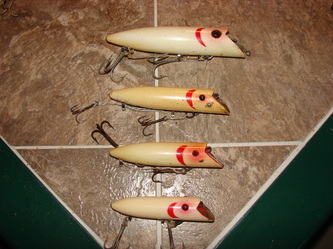 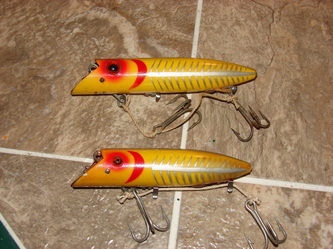 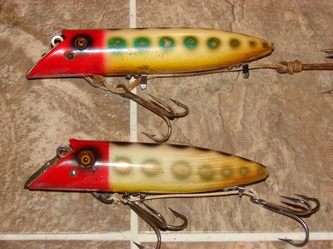 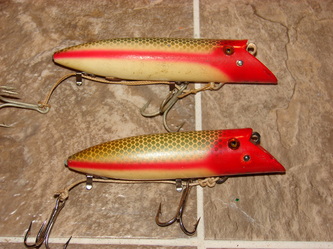 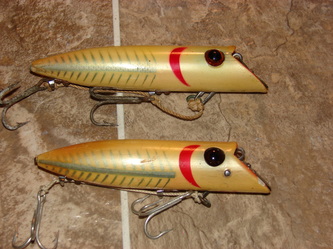 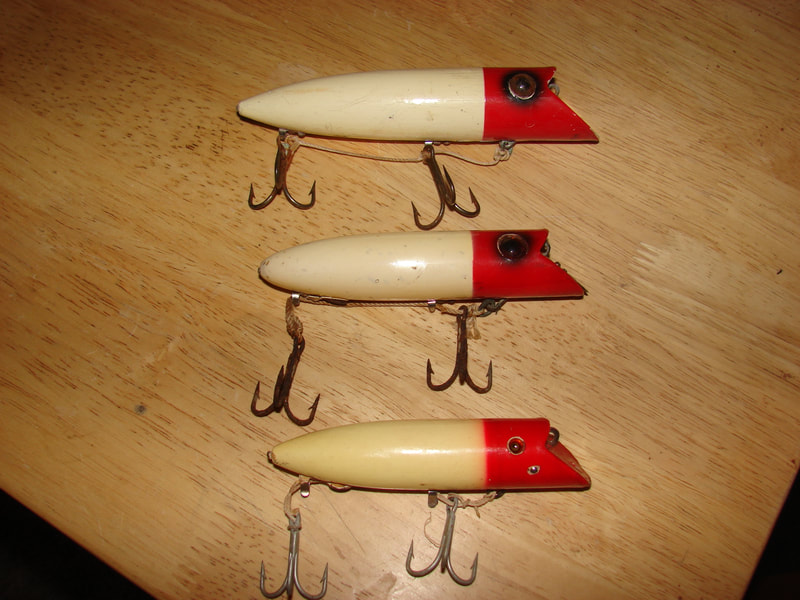 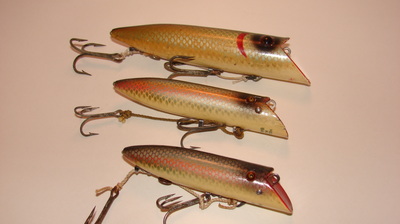 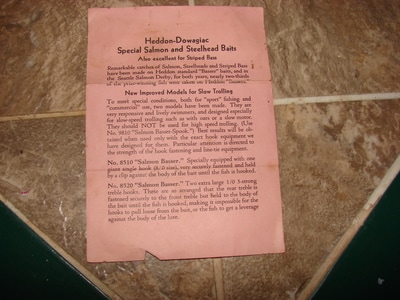 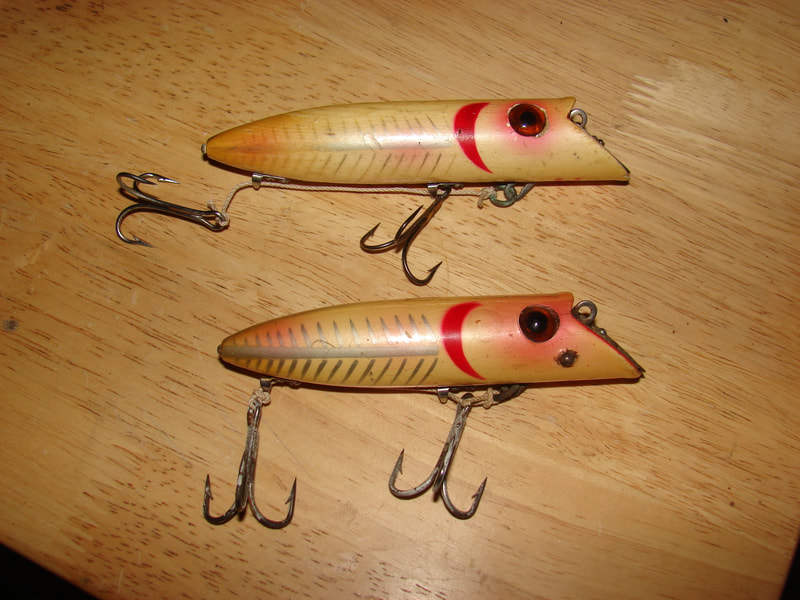 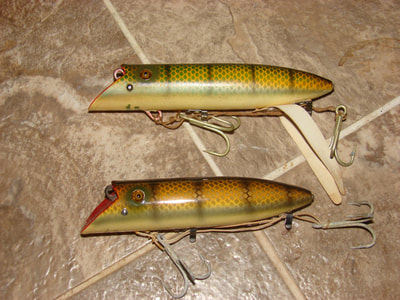 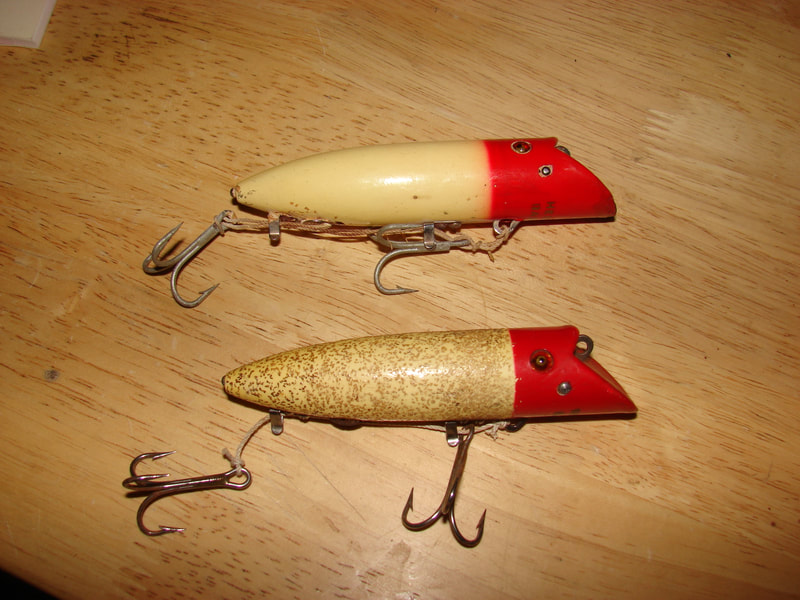 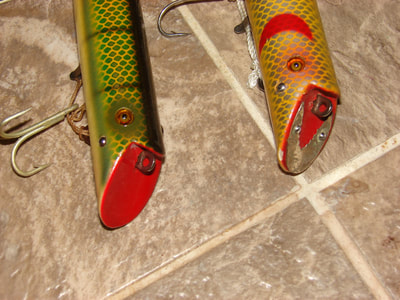 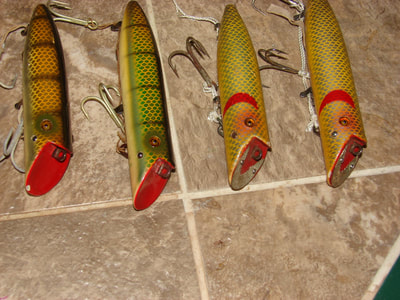 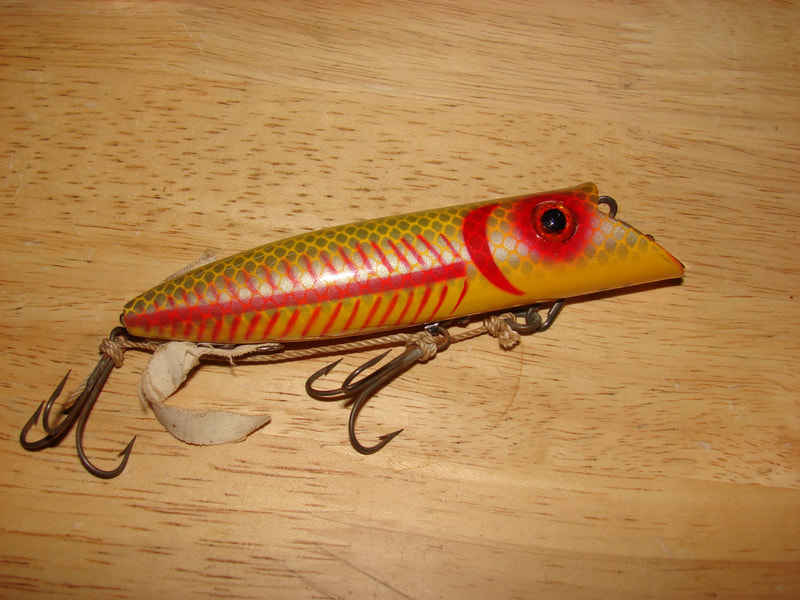 SS8500 Basser
While not considered a "King Basser" the SS 8500 Basser is similar in that it sports the string rigged breakaway hooks. The SS model is the same length as a standard 8500 basser (4.25 inches). This model appears to be a special order bait  as I have not seen it listed in any catalog. Again, these baits appear to be marketed/sold in the Pacific Northwest for use in the salmon fishery. These baits are pretty tough to come by (at least for me) as I have only been able to locate the three shown below. Some collectors call these baits "Silver Salmon" bassers but I have not seen anything specific from the Heddon factory to authenticate this moniker. Model SS8500 Bassers are typically found in Brush style boxes but may have come in the later Up Bass boxes as well. Any additional info on these tough baits is especially welcome. Below are a few pics of the three I have. 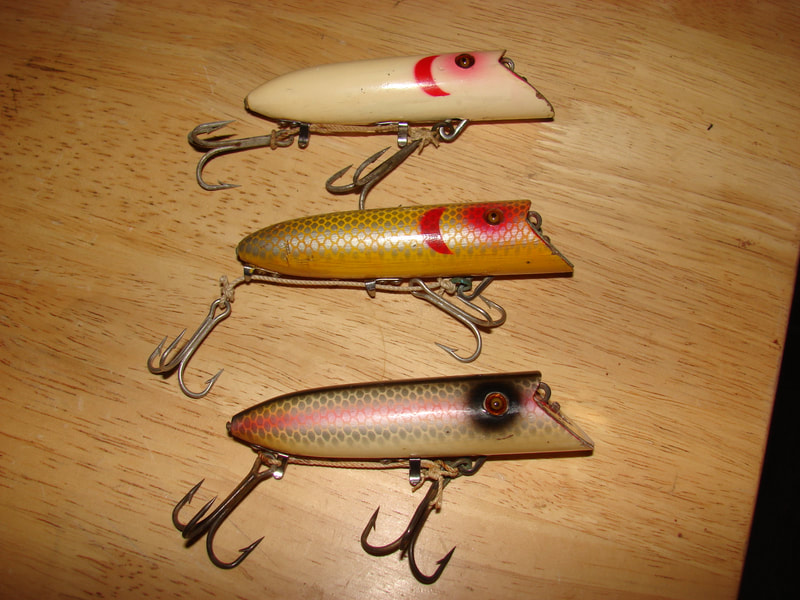 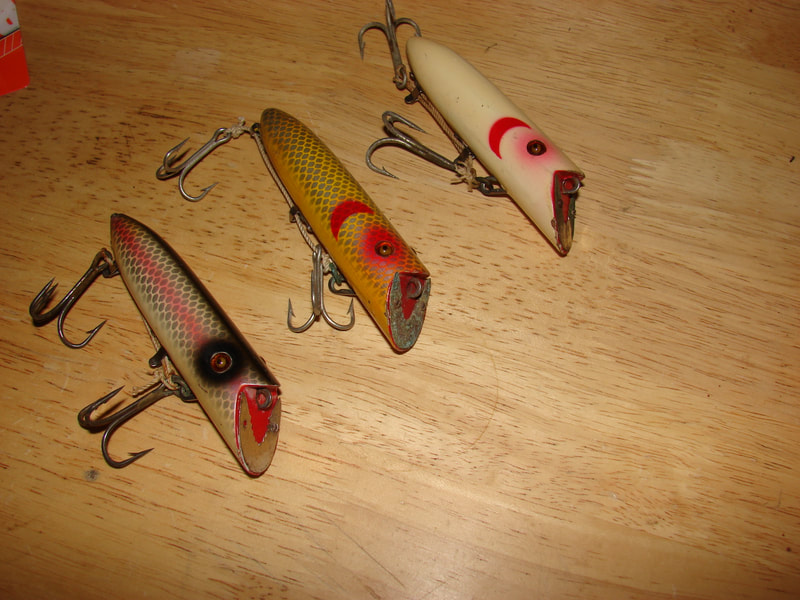 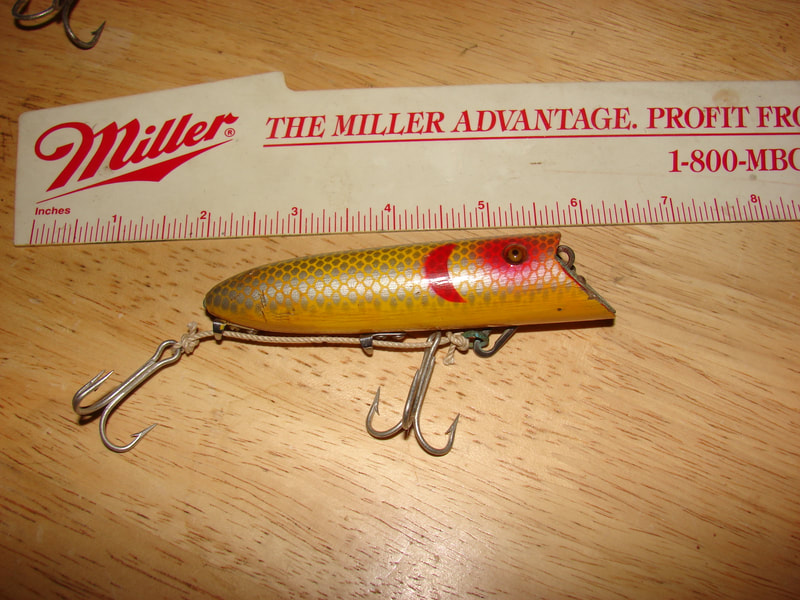 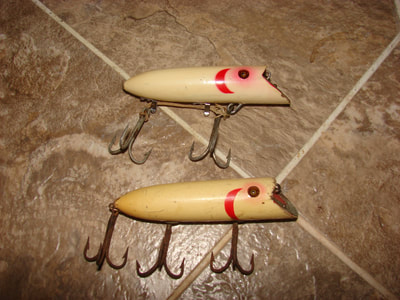 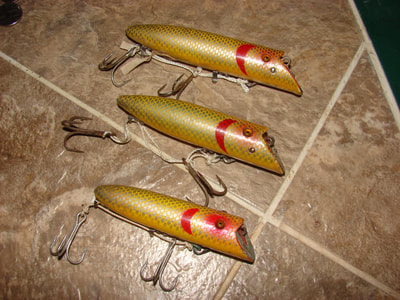 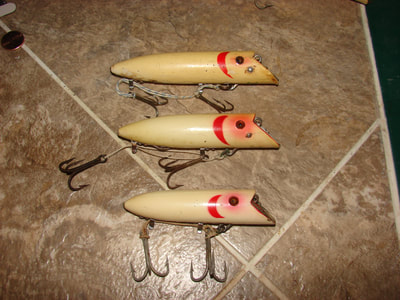 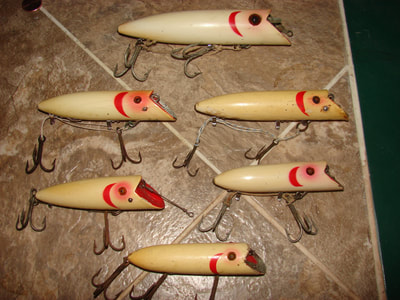 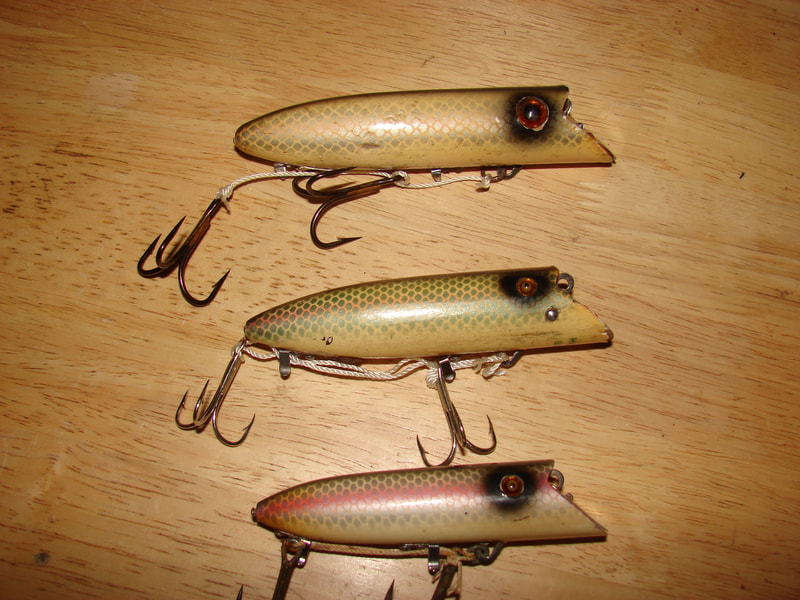 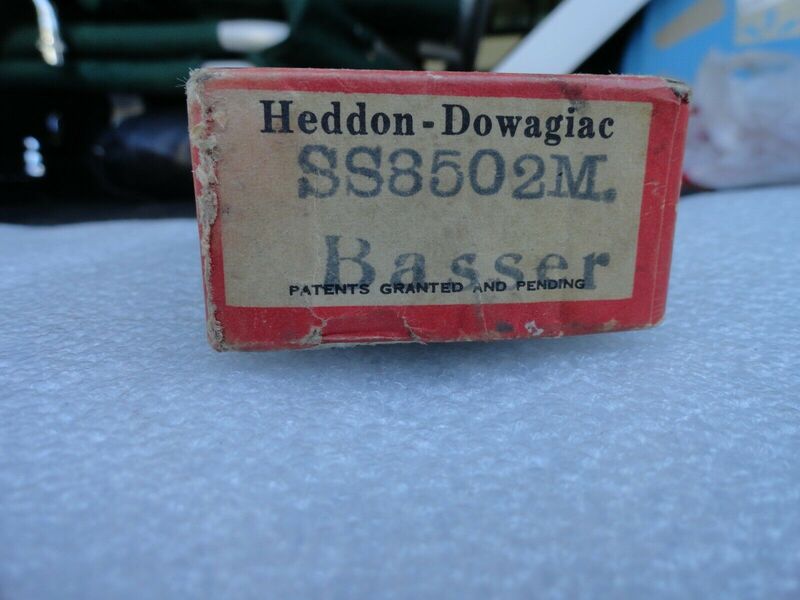